Credit Card Processing : To start accepting credit card payments online, merchants need a payment service provider like Allied Wallet. Domestic and international cards are accepted. The company also charges a flat rate of just 1%. If you already have a credit card processor online, you can use Allied Wallet’s services as an alternative payment option. Merchants can send to Allied Wallet transactions that traditional payment processors decline.

ACH Solutions : Most in-house ACH processing can be cumbersome. Allied Wallet can take that off your hands. The processing of e-checks usually takes time. Allied Wallet, however, promises to do that quickly and at a better rate. ACH is also the ideal payroll service for companies with a large workforce.

Processing Fees : Allied Wallet claims that it has low and flat-rate pricing. According to its website, its turnkey solution has a fee of 1% plus 10 cents per sale. It also has an executive program. Allied Wallet said that it has no sign-up or set-up fee and it has free integration assistance.

Hidden Charges : There is no information about hidden charges by Allied Wallet. 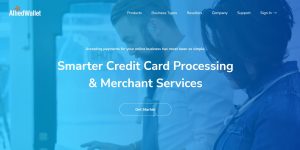 Rip Off Reports : There are over 35 different customer complaints about the company. Many of them involve high-risk businesses. These reviews allege that Allied Wallet is a rip-off because it withheld their money.

Other Complaints : Other complaints about Allied Wallet have something to do with their customer service being unable to address the customers’ issues. Some of them said that they hadn’t received a favorable response from the company.

The Better Business Bureau (BBB) gives ratings to companies based on customer reviews. Allied Wallet is not accredited by the bureau.

The BBB website has a current alert for Allied Wallet. It referred to the cases against Allied Wallet filed by the government “involving business’ marketplace conduct.” However, there was one review site that said Allied Wallet was accredited by BBB until 2014. The bureau revoked the accreditation in December 2020 because of the company’s failure to abide by the BBB’s rules. The BBB said that Allied Wallet failed to maintain a positive track record. It had three complaints formally filed against it from 2017 to 2020. The BBB requires that accredited businesses must resolve the dispute. However, although the disputes were resolved, BBB said these were to the dissatisfaction of the merchants.

Allied Wallet exists as a company with a well-designed website and recognition from several associations around the world. In fact, it is listed in Inc. 500, Fortune, and Wired. It also has active participation in some charitable organizations such as Action Innocence and the Association of Sites Advocating Child Protection.

Plenty of merchants called Allied Wallet a scam in their reviews. One merchant said that the company blocked his account. He did not get his money. Some said they have been duped because they didn’t know that all Allied Wallet does is to avail of services on their behalf. The company apparently acts as a middleman to other business services. Many of the merchants said that they did not receive their payouts. Their money was held back. Some customers also said that Allied Wallet charged their credit cards for online transactions they did not authorize. Apparently, the company has access to their credit card information when the data should have been encrypted.

Allied Wallet has faced three lawsuits. The company reached a settlement for two of these cases while the other case led to the arrest in Lithuania of Allied Wallet CEO Andy Khawaja. In 2010, the company settled with the Federal Bureau of Investigation (FBI) for $13.3 million. This was in relation to a case wherein the FBI said Allied Wallet willingly engaged in online gambling.  In 2019, the Federal Trade Commission (FTC) filed a case against the company. It said that it processed payments for merchants with illegal businesses. Allied Wallet supposedly set up false information for the merchants.

Finally, in 2020, Allied Wallet’s lawyer pleaded guilty to fraud and for funneling $6 million in campaign contributions from Mr. Khawaja. The company was also involved in the scamming of Fifth Third Bank. Allied Wallet apparently made the bank process $5.4 million in fraudulent card payments.

The company doesn’t publish customer reviews on its website. However, quite a number of negative merchant reviews can be found on different websites. Most of the reviews complained about Allied Wallet purchasing services on their behalf. The company apparently merely acts as a middleman to these business services. All the while, the clients thought the company would provide the services. Many of the merchants also alleged that Allied Wallet held back tens of thousands of dollars. The company did not give them back their money.

Many of its past customers said Allied Wallet canceled their accounts. Its staff also blocked their emails. Other customers also said that the company charged their credit cards without authorization.

It might be a good idea to practice caution when dealing with Allied Wallet. Although the company started with a good BBB rating, this has since been revoked because of the various cases filed against it. Customers have also revealed that the company has charged their cards without their authorization. There are many other payment processing service providers that may be more worthy of your time and money.